Therefore, to know whether they gain knowledge from the PLE, TLE and SLE introduced, I gathered feedback from my students. These are the real evidences that would make me improve myself for the better (I always tell myself that!). In gathering feedback, I conducted surveys and formal interviews with the help of my tutor. I also conducted a few informal discussions with students who would like to share opinions on my style of teaching. I also look at their performance between groups of students who followed my PLE vs TLE.

Some of the evidences collected are shared below.

During the first few semesters when I introduced PLE and TLE into my teaching, I really feel the need to know whether students could accept PLE or I should just stick to TLE. Therefore, there are few rounds of data collection conducted to few students of mine in different groups. Since it was the first few times I introduced the PLE and TLE, I really wanted to know whether they learn and gain knowledge from these styles of teaching. For this particular case, I have divided the group into two which are (i) students who go through PLE and (ii) students who go through TLE. I look at their performance and collect more data at a later stage.

Figure 3.1: Students’ score based on a test conducted between TLE group vs PLE group

Referring to this particular test shown in Figure 3.1, data was further analyzed as shown in Table 3.1. The table shows data that has been collected from the two different group of students (TLE vs PLE). These data shows that more than 60% of PLE students scored full marks in the test, while about 48% of students scored full marks in the TLE group. Nevertheless, the other distribution was found almost similar between PLE and TLE group.

Table 3.1: Students’ score based on a test conducted between TLE group vs PLE group

There are times where I conducted an evaluation based on students work. In this particular case, I conducted an evaluation based on individual projects given. Students were divided into two groups (i) TLE group to complete the project and (ii) PLE group to complete the project with minimal supervision, but extra materials were given to them. In another individual project, the students were switched. The group that has undergone TLE is now being grouped to the PLE group and vice versa. Final project marks for both projects were collected as shown in Figure 3.2. The figure is showing each individual projects marks when students completed the TLE project and PLE project. Data were then analyzed further as shown in Table 3.2.

In terms of percentage, majority of the students (i.e. 43.75 percent) scored the same marks for both their TLE and PLE projects. Although they are given different titles of each projects to be completed in TLE and PLE, and working at different environment (i.e. PLE and TLE), it seems that it does not affect their work to be delivered. Another group of students which is about 37.50 percent seems to work better in delivering their projects when in PLE as compared to TLE. Only a small number of students (i.e. 18.75%) works better in their projects when in TLE as compared to working in PLE.

Besides test and projects, I also conducted a quiz on a given topic to know how students perform during PLE vs TLE. The topic was given earlier, a group of students were selected to be attending lectures and tutorial covering that topic (i.e. TLE). Another group of students attended lectures and were given materials to be studied on their own whether individually or in groups. They were given their own freedom to conduct their own study groups and may use other reference materials as well for that topic (i.e. PLE). A quiz was then conducted to test on their knowledge and understanding. These two different groups of students were then switched. Another topic was then given on the following week. The same procedure takes place, which are learning through TLE and PLE for those different group of students. The quiz results were collected as shown in Figure 3.3.

Based on some of the data collected above, it shows interesting data on how students perform based on the TLE and PLE delivery. I find that it is something that I should reflect on. I could not make a conclusion that PLE is better than TLE and vice versa.

Therefore, after conducting PLE and TLE in my teaching delivery to few groups of students in different semesters and courses; I realized that there is a need to conduct both TLE and PLE in teaching and learning. It should be coupled together and not to be conducted alone or separately. In other words, TLE is needed and accompanied by PLE. Therefore, students get a balance of both. This will apply to all type of students. They need to listen to lecturers on the fundamental concepts and then proceed with the detail of it in TLE. Later on, they need to conduct PLE to master the concept, find solutions to problems and creatively think about way to apply the concept to other related cases. This is what I have concluded from the reflections I have done for few semesters.

Throughout this section, I have mentioned about students’ performance based on TLE and PLE. Nevertheless, I have not mentioned about SLE. I did not conduct any formal assessment on SLE. I did some observations on SLE and interview some students on how they learn throughout SLE delivery.

This interview of how SLE motivates them to be better is a good value that makes them want to excel in class too. Therefore, I conclude that SLE is teaching my students to better in soft skills and other skills that could not be shared through teaching and learning through TLE and PLE. It is skills that could only be learnt by them participating, meeting people and experiencing the events. 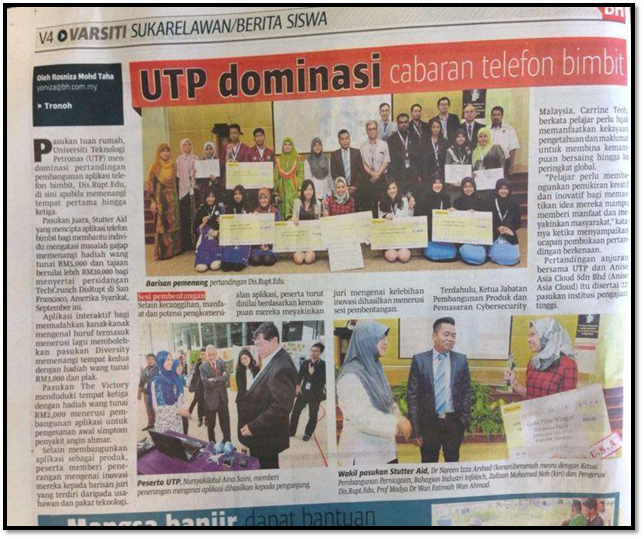 Picture Source: Berita Harian. My students entering and organizing a competition related to knowledge management mobile apps. We received good feedbacks from the industry who attended as panel of judges. The competition received good response and media coverage. Students learnt a lot from this SLE activity where they participated as organizing committee and some participated as contestants.

Referring to Figure 3.4 and Table 3.4, the graph and table presents students’ performance for the above-mentioned course. This course was taught in May 2017 by me and in January 2018 by another lecturer. The course syllabus, course learning outcome, assessments and materials remain the same for these two semesters. Nevertheless, the approach used for teaching in class differs between the 2 different lecturers. In conclusion, I would like to highlight that the flipped classroom strategy used during May 2017 that involves the TLE, PLE and SLE presents better results as compared to the January 2018 semester. The Average Score for May 2017 semester in ‘A-’ as compared to January 2018 which is ‘B’. The lecturer (name is kept anonymous) teaching in January 2018 semester used only active learning approach in class without having PLE and SLE activities conducted outside classroom as pre and post activities. This is an evidence showing that students performed better when flipped classroom strategy is introduced with TLE, PLE and SLE embedded in teaching and learning.

**Students achievement and mapping on constructive alignment to CLOs has been discussed and presented in Section 3b.

Students Assessments and Reflections on My Teaching and Supervision